Kshs 7,000, actually Kshs 6,999 only, is the promotional tagline HMD Global is using to lure Kenyans into purchasing the Nokia 1 Plus.

Don’t get me wrong, Nokia 1 Plus is a pretty decent phone. It has a big 5.45 inches screen at 720p resolution that provides the much needed grip we have become used to, and a pretty decent experience for video viewing, game playing, photo browsing, and generally basic human/mobile interactions. But it is not the phone for me. Never.

You don’t want that.

You want a phone that’s fast, responsive, and smart. After all, smartness also implies speed, and when a phone is not fast, it doesn’t deserve to be called a smartphone. Then things that make phones fast change with time.

In 2015 it would have been okay to have a phone with 1GB RAM for instance, but not in 2019. The minimum RAM an average mobile phone user needs in 2019 is 3GB – 4GB the better. From mid 2020 that minimum is likely to jump to 6GB, the current RAM size on my device. I have used the Infinix Zero 5 for two years, and I tell you the truth, despite the many problems infinix phones have, it has never disappointed me when it comes to speed. 6GB was a beast when I bought the phone in December 2017, and it is still a beast. By 2021 however, I will probably prefer an 8GB smartphone.

That’s the first problem with Nokia 1 Plus, it has a meagre 1 GB RAM.

Storage is the second most important aspect of a device you want to buy. By 2015 a 16GB device would do. But since then the most important Apps including the OS itself gobbles up the entire 16GB, leaving you with no space to store any files, photos, or videos. Also, I tend to use my phone as my flash disk all the time. That means I really need some free space to be always available on the phone for simple file transfer from whoever to my laptop. For those two reasons, my very minimum right now is a 32GB storage, but the standard has since become 64GB. I’ve become so used to 64GB that I don’t know what I would do with a phone with any less storage.

Then you have this Nokia 1 Plus poking its ugly head but for a meagre 8GB. Seriously?

The third important feature is the screen. Don’t go for anything with the less than 1080p, just don’t. You better save that money until you are able to afford at least 1080p, and that doesn’t call for a lot. With shs 15K you can get a phone that meets all the minimum quality standards discussed above, and that’s before you consider the black Friday deals.

Battery is also a key consideration I look for. I like a phone that can stay with one charge for a minimum of 24 hours … and that’s where Infinix phones beat majority of these phones in the market. Huawei is doing a good job at trying to use AI for battery management. Anyway, you get the idea – at least 24 hours in one charge.

NOTE: Camera did not feature anywhere.

See also: A very ugly Nokia is available for shs 8,300 in stores across Kenya

Who among you needs this Safaricom/Posta Digital P.O. Box? The MPost?

Get your Huawei Y9s from any retail stores across the country 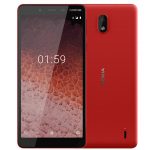 A very ugly Nokia 1 Plus is available for shs 8,300 in stores across Kenya