Bob Collymore’s latest tenure as the CEO of Safaricom comes to an end in August 2019, a tenure that he doesn’t want to renew given that he wants to focus on his health. As you can remember, Collymore was out of the country for close to 10 months beginning October 2017 to attend to specialized treatment over his cancer of the blood condition. The question that has arisen therefore is, who will replace Bob Collymore as Safaricom’s CEO going forward? Two options are available, either a Kenyan, or a Non-Kenyan; and Kenyans have asked, “If a Kenyan takes over the management of Safaricom, won’t Safaricom collapse?”

The Government of Kenya that now owns equal number of shares as South Africa’s Vodacom at 35% has voiced the concern that whoever replaces Bob Collymore should be a Kenyan. It is not clear whether other shareholders especially Vodacom South Africa, Vodafone UK or even the other shareholders who own shares through NSE are in agreement, but sentiments expressed by Kenyans through several social media outlets tend to disfavor the idea that a Kenyan should replace Bob Collymore, with almost everyone preferring a foreigner to come in and take the mantle from the great CEO. The sentiments all those who prefer a foreigner to a Kenyan as Safaricom’s CEO have in common is that a Kenyan is more likely to run down the giant teleco, given the scandalous nature of today’s economic management of the country. To support their fears, they point to the ever loss making national carrier KQ that many believed has been run down by CEOs who listen to the whims of political leadership. To examine whether the fears of those afraid of a Kenyan taking over the leadership of Safaricom has any grounds, it is important to ask the following questions:

If the answer to both questions is yes, then we can assign a reasoned likelihood that a Kenyan CEO taking over the leadership of Safaricom will lead to Safaricom collapse. In a thorough study, it would be interesting to take a closer look at what’s common in all loss making companies.

As of today, the renowned loss making companies are Kenya Airways, National Bank of Kenya, Mumias Sugar (and basically almost all the sugar factories in the country), Telkom Kenya, Airtel Kenya, and Kenya RE. There are several other loss making companies especially in the tea and insurance sectors whose CEOs are both local and foreigners, but we’ll talk briefly on Kenya Airways and Mumias, as National Bank has always had local CEOs.

Since successful privatization in 1995, Kenya Airways has almost always had Kenyan CEOs who drove it from a loss making Government Parastatal to one of the biggest profit making East Africa’s companies, until Taitus Naikuni left the company in 2014, the time at which Kenya Airways started making losses. There are many who hold the opinion that the losses by Kenya Airways were orchestrated by Taitus, including allegations that together with Sports Pesa CEO Ronald Karauri, he made decisions that would lead to an almost total collapse of the once vibrant pride of Africa, decisions that included purchasing of high maintenance aircrafts, entering into a fuel hedging agreement that has largely been blamed for the high cost of operations, and antagonizing stuff especially the cabin crew who on numerous occasions staged go slows that occasioned flight delays leading to travelers preferring other airlines. Since Naikuni left the airline in 2014, Kenya Airways has reported losses after losses running into billions of shillings to the tune of Shs 26 billion, then Shs 25 billion … and even most recently it made a loss of Shs 7.6 billion in the Financial Year 2018/2019 – a loss that has been made under a foreign CEO by the name Sebastian Mikosz.

Mumias case is rather complicated. It’s loss making history goes back to early 2013 shortly after its most renowned CEO Dr. Evans Kidero left the firm in June 2012 to vie for Nairobi governorship. Given that Mumias started making losses immediately Kidero left the company, questions have been raised as to the source of the massive wealth Kidero used to campaign for the post of Nairobi Governor, a post that he managed to win in the March 2013 elections. After leaving Mumias, Peter Kibati took over but his tenure did not last for long, as Mumias Board sacked him in June 2014 over a Shs 1.1 billion loss. Ever since, Mumias has been unable to come back to her profit making spree despite hiring a foreigner to take over the helm of management. What’s similar between Mumias and KQ is that the Government holds massive shares, whereby the voice of Government in decision is making is paramount. The same can be said of the National Bank of Kenya and many other government controlled parastals and companies.

The likelihood of Safaricom collapse if a local CEO takes over should also be viewed from the angle of the sector the company is operating under. Safaricom is in the telecommunication sector where Airtel and Telkom have been also been operating in for decades. Despite being owned and managed by foreigners, Kencel, Celtel, Zain, and now Airtel has been on a loss making spree ever since Safaricom took over from it as the largest telecommunication company in the country. Telkcom Kenya, even after being bought by France owned Orange, has never tasted profitability in this era of cellphones. Orange struggled for years to bring Telkom Kenya to a profit making company until it gave up in 2015. The loss making parameters of Airtel and Telkom cannot however be compared to those of Kenya Airways and Mumias, as there haven’t been corruption allegations that have bedeviled the two telecommunication companies. Theirs have largely been seen as market forces where Safaricom controls over 60% of the market share, leaving the two with a paltry 40% to fight for.

Turning our attention away from the loss making companies, it is prudent to also talk a bit of the profit making companies top being Kenya Commercial Bank (KCB), and Equity Bank of Kenya. Kenya Commercial Banking, despite being resistant to change and one of the banks that offered the worst banking services in the country for decades, remained profitable under the leadership of a Kenyan Martin Oduor. Even after Joshua Oigara took over as the CEO in 2012, the bank has remained profitable, where currently it is the most profitable bank in Kenya. Equity Bank that has been the best performing bank ever since it revolutionized the banking industry in mid 2000s, has remained under the leadership of James Mwangi. The similarity between Equity Bank and Safaricom is that both institutions democratized their respective sectors, namely the banking and telecommunication sectors. One may say that the reason Equity Bank has remained profitable ever since it became a bank in 2004 is because the government has had no control over its management, but the fact that KCB in which the government has majority shares through Treasury and NSSF (23%) implies that not all government controlled companies whose CEOs are Kenyans make losses.

Lastly, it is hard to pin down corruption as the sole cause of losses in companies such as Kenya Airways and Mumias. Kenya Airways for example made losses when almost all major airlines in the region except Ethiopian Airlines were making losses. Mumias also followed the trend of sugar industry locally where companies such as Nzoia Sugar, Chemelil, and Muhoroni went under. In the telecommunication sector, it is interesting to note that Safaricom has been the one able to take in all the industry profits for the last two decades, even though the Government has had a major stake in the firm, even after it lost a controlling stake to UK’s Vodafone when the company went public in 2008. In addition to that, assuming that a Kenyan taking over the leadership of Safaricom will automatically lead to the collapse of the company assumes that Safaricom hasn’t put in place internal structures through which the company is managed. For example, the easiest way Government’s influence would lead to the collapse of Safaricom is through the tendering (tenderpreneuring) process that the Government is known for manipulating. This however would only be possible if shareholders like Vodacom South Africa let the belt that has held the company tight for these years loose.

From the surface therefore, it is not obvious that Safaricom collapse will happen under a Kenyan CEO, even if the Government wanted her to run it under. 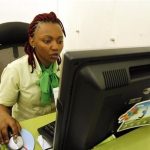