Are you tired with your current phone? Definitely yes. Maybe it is because it hangs. Or it doesn’t take as cool pictures as those you see on snapchat. Or it is because it doesn’t support proper 4G. Or it is because it’s just old. By the way a normal human being ought not to own the same smartphone for more than two years. How else are you supposed have a taste  of the latest technologies if the technological device you own dates back to the time iPhone 1 was invented? These reasons, and the fact that Huawei launched the device today at Sarova Stanley, got everyone talking about Huawei Y9 2019. We at Kachwanya.com were not left behind – we made sure we took our front seat to tweet about the launch as it happened.

The phone has arrived. @HuaweiMobileKE is launching the #ForMagicalView #HuaweiY9 smartphone in KE at Sarova Stanley. The phone has amazing features for its price that are detailed in subsequent tweets pic.twitter.com/EiGUNnhGD6

And, no, Kenyans aren’t talking about Huawei Y9 2019 out of idleness. The phone deserves to be talked about, and that’s because it promises to deliver high tech performance on display, camera, and battery. Let us start by the display. Ever since the iPhone X introduced the notch concept, every phone manufacturer has tried the best they can to copy the design, despite its ugliness – and Huawei Y9 2019 has not been left behind. The advantage of the notch is that it allows for the manufacturer to trim down the bezel almost to zero, but at the compromise of a full view screen. That is, when viewing images and videos on phones that have notches, the user is supposed to not see the area covered by the notch.

Huawei has however found a work around where despite incorporating the notch in Huawei Y9 2019, the phone still provides full view. I personally experienced this when I tested the Huawei Y9 2019 during its launch event. My immediate worry was that the notch actually introduced a virtual bezel – or an area of the screen that is not being used as a screen – but the customer assistant was quick to point out that that area is still being used to display information such as the network and battery bars and other important information. That should be somehow convincing, but it is still a virtual bezel nonetheless.

The display itself is made of IPS LCD screen which features a 2340 by 1080 Full HD pixels (or HD+) for an aspect ratio of 19.5:9. These are the display ratios that the phone manufacturers have adopted ever since they started making the screen slightly taller to avoid making them way too broad for a comfortable one hand use. The large screen, alongside taking up 76.7% of the body, sits on a 157.2 x 75.3 x 7.9 mm dimension. The 7.9 mm thickness is due to the fact that Huawei decided to provide a slightly curved back for ease of holding the phone and sliding it inside a pocket.

The most important aspect of the display is that it has been TÜV Rheinland Certified. This certification is given to displays that have very low blue light emissions – light that has been blamed for strained eyes after staring at screens of phones, tablets, laptops and others for long. If you have experienced itchy eyes after using your phone in darkness for a significant period of time continuously, then you have the blue light to blame. Huawei Y9 2019 however has been made such that these blue lights are very low and thus it will take even longer before your eyes get strained.

Talking about the battery

I was confused on whether I should talk about the battery or the camera first, but as they say, you save the best for last. The battery in Huawei Y9 2019 is a non-removable Li-Ion powerhouse boasting of 4000 mAh. Other than Infinix and some other unknown brands, no mainstream phone manufacturer has been able to pack this large amount of battery on a truly functional device like the Huawei Y9 2019. Samsung tried to boost the battery in the Samsung Galaxy Note 7, but the phones went about exploding like there is no tomorrow. It is today that Samsung has managed to incorporate a 4000 mAh battery on a device, and it is in non-other than the premium Samsung Galaxy Note 9. This then means that Huawei Y9 2019 sits on the same table as Samsung Galaxy Note 9 as far as battery capabilities are concerned.

This reminds me. I told my brother to plan giving away his Oppo smartphone to someone in need and upgrade to the Huawei Y9 2019. He quickly pointed out that the issue he has with Huawei devices is the battery life, but I was quicker to show him the battery spec, and tell him that together with the Intelligent power management tools the phone comes with, it will definitely perform much longer than my Infinix Zero 5 – even though my Infinix can go for two straight days before needing a recharge.

Although the battery capacity in Huawei Y9 2019 is up in the roof, charging it won’t take a minute longer. Actually, it will take two and a half hours shorter. This is because the phone comes with fast charging capability where it will charge to capacity in only one hour and a half. But given that the phone isn’t a flagship device, it doesn’t come with the wireless charging maneno.

Then the cameras – The 4AI Cameras

As we wait for the professional mirrorless cameras to come with their own AI enhancements, let us just enjoy the benefits and beauty of the 4AI Camera tech that Huawei has brought into Huawei Y9 2019. The first thing the camera is capable of achieving, under AI instructions, is automatic recognition of up to 22 unique scenes. These scenes include your typical landscape, portrait, food, flower, cat, beach, and new ones such as group, panda, waterfall, text and 12 others. See image below.

The 4AI Camera technology also allows the device to take back lit photos, without losing brightness of the subject. In this mode, the phone will give both clear subject and clear background, and no detail shall have been lost. Also, the 4AI Camera can take clear photos at night using the Hand Held Night Mode. When using the Hand Held Night Mode, the photographer needs to focus on the subject steadily for six seconds, then the camera will take the shot. No shaking. Those of you who love taking portraits with bokeh and blurry background haven’t been left behind. See the sample image below. These camera capabilities are not only being made possible by the 4AI Camera engine (basically AI), but also by the fact that both the selfie and the rear comes come in twos. For the selfie lovers, Huawei Y9 2019 features a 16MP main sensors assisted with a 2MP sensor. On the rear end, we have a 13 MP sensors coupled with a 2 MP sensor. This still means that a photo taken by the front camera will still be a 16 MP image at full size, and that taken by the rear camera will still be 13 MP at full size. The resolutions are not additive as Ms. Mutuku once mistook.

I haven’t talked about the hard core specs and full experience with the device. For those, you will allow me to use the device for a few days then when I come back I will give you a hands on review. As for now, all you need to do is to also get your hands onto yours by placing a preorder over at Jumia Kenya by following this link. Once there, all you will need to do is pay a deposit of Kshs 4000 and start counting the days for your preordered gadget to arrive. The phone goes for Kshs 24,990 only – even when most Kenyans who were asked to guess the price of the phone put up figures between Kshs 30,000 and Kshs 35,000. If you are a teacher, you need to dial *865# and join the Minet health insurance plan 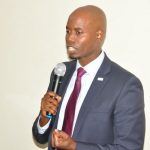 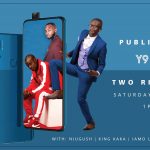