When LG recently unveiled its highly anticipated LG G5 at the Mobile World Congress 2016 in Barcelona, the company presented a paradigm shift in smartphone design – a design that some have described as “coming from the future”.

LG G5 is the world’s first smartphone to employ modular technology; presenting a radical reimagining of the smartphone.

The company earned top honors at the congress for its modular type flagship smartphone, demonstrating that it is at the forefront of mobile communications.

Modular is a design approach that subdivides a system into smaller parts called modules that can be independently created and then used in different systems. The philosophy’s goal is to enhance customization and place the user in complete control.

This philosophy has taken root in a variety of industries, leading to a new wave of modular products that improve flexibility and usability in a number of key areas.

With this move, eyes of the mobile industry now seem to be set on LG, eagerly anticipating what’s next.  This is particularly so because prior to the launch of G5, personal customization in smartphones amounted to little more than choosing a unique case, ringtone or lock screen photo.

The application of modular technology represents a way forward for smartphones, bringing the same level of customization to smartphone hardware that was once only possible for software.

In addition to the highly anticipated debut of the G5, the company also unveiled its new LG Friends lineup, a collection of companion devices or components that transform the new smartphone into a digital camera, hi-fi audio player and more.

Complete with camera and audio accessories, the Friends lineup of compatible devices gives the G5 the ability to capably perform a wide range of tasks, setting the tone for the next generation of premium smartphones.

By allowing the consumer to choose which parts of the phone they want to upgrade, the revolutionary G5 puts consumers in control of their smartphone like never before. Users that seek to upgrade a single component instead of purchasing an entirely new smartphone can save money. Users can upgrade what matters to them, creating a personalized smartphone that is an accurate reflection of their passions and interests.

As the first company to bring accessible modular technology to the public, LG is taking a lead role defining innovation

The phone is set to be introduced into the Kenyan market before the end of this quarter. 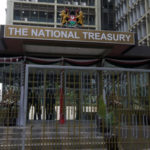