LG came up with ‘LG Smart Home’, which connects all home appliances into a single, cohesive system in order to increase convenience and simplicity. Samsung on the other hand is also developing incredible IoT devices refrigerators. Generally, LG and Samsung are taking over the home market by introducing smarthomes.

The growth of internet of things has made many companies come up with devices that can communicate with each other to ease work. IoT is also complemented with artificial intelligence which will be the main source of human extinction, well according to scholars.

Samsung is currently leading in internet of things or rather developing devices that communicate with each other. The company has a plan of making all the devices IoT by 2017. To accomplish this mission, Samsung invested over US$100 million in its developer community by strengthening its accelerator programs and further expanding its international developer events in the breath of making all Samsung hardware IoT ready, further accelerating the expansion of IoT devices available in the market.

In addition, LG has introduced a smart washing machine which is equipped with several smart technologies that simplify the task of doing laundry. Guided Laundry can recommend and automatically apply the optimal settings for any type of laundering scenario.

As much as IoT might be helpful, it has its downside which can be dangerous for users. Two months ago, Lakhani; a security researcher at Fortinet, accomplished a hack without any coding skills. He visits Shodan.io, a website where anyone can find a huge trove of Internet-connected devices, from baby monitors to cars, cameras and even traffic lights. The website is like a search engine for the Internet of Things. From the site, he gained hacking skills which helped him hack his way into anything. Hopefully, LG and Samsung can come up with good security features. 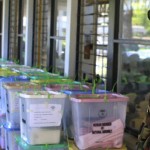 Intel Corporation partners with UON to start an incubator for startups