Disclaimer – parts of this articles may irk a staunch spiritual or religious person, read carefully.

Today is the fourth anniversary since I changed my life’s philosophy from agnosticism to atheism, thus it is a perfect day to talk about a technology that can help you transition from an adherent of gods to atheism at no hustle. There are very few things that are hard to do and the hardest is the ability to discard life long ideologies and dogmatic beliefs to freedom of thought. This I know from experience. For example, it took me three years to solidify my doubts in gods – meaning I started having doubts in religious teachings in 2006 and it wasn’t until September 2009 that I became an agnostic (someone who says that existence of gods is unknowable). It took me two more years to move from agnosticism to atheism (someone who acknowledges that existence of gods is highly unlikely so it’s safe to conclude that gods don’t exist).

It takes that long to fully transition as there is need to do a lot of reading while trying to make sense of beliefs and teachings that have been taught as truths for centuries. You need to be in a position to convince yourself that indeed these religious truths are largely based on myths, legendary stories, dreams and wishful thinking. You need to be in a position to accept a bitter truth that to all other religions, yours is a false one – same way you treat all the others as false religions.

Yes it is extremely hard for any once upon a time staunch follower of ghosts and spirits to forsake them and accept reality. But it doesn’t have to be hard anymore. Since the main aim of technology is to make life easier, a discovery has been made that a device long used to measure the effects of a stroke on brain-muscle connectivity and treatment of major depressive disorders can enable those willing to discard the life long held beliefs in gods and angels skip the over tasking knowledge acquisition stage to simply become atheists. The mind control device is the transcranial magnetic stimulation (TMS) headset.

Psychologist Dr. Keise Izuma in collaboration with the University of California, Los Angeles (UCLA) employed the TMS to find if a brain region that is linked with solving concrete problems, like deciding how to move one’s body to overcome an obstacle, is also involved in solving abstract problems addressed by ideology, and to their amazement, participants were able to change both their religious inclinations and political ideologies after undergoing the transcranial magnetic stimulation. That part of the brain that they stimulated is at the posterior medial frontal cortex – located near the surface and roughly a few inches up from the forehead and is associated with detecting problems and triggering responses that address them.

To obtain the results, participants, half of whom were subjected to a low-level “sham” procedure that did not affect their brains, and the other half receiving enough energy to lower activity in the target brain area, were asked questions ranging from religion where they were required to state their beliefs in gods, spirits, devils, demons, hell and heaven to nationalism/political questions to determine whether they were conservatives or liberals.

The findings from the study that was published in the journal Social Cognitive and Affective Neuroscience, reveal that people in whom the targeted brain region was temporarily shut down reported 32.8% less belief in God, angels, or heaven.  They were also 28.5% more positive in their feelings toward an immigrant who criticized their country.

Commenting on the study, Dr Izuma from the York University’s Department of Psychology, said, “We decided to remind people of death because previous research has shown that people turn to religion for comfort in the face of death.  As expected, we found that when we experimentally turned down the posterior medial frontal cortex, people were less inclined to reach for comforting religious ideas despite having been reminded of death.”

It’s not just the religious ideologies that were affected by the TMS. The researchers also found out that people who hold strong political convictions that certain people are “outsiders” (US immigrants in this case), were able to react more positively to issues of immigrants after undergoing TMS.

“We think that hearing criticisms of your group’s values, perhaps especially from a person you perceive as an outsider, is processed as an ideological sort of threat,” said Dr Izuma. “One way to respond to such threats is to ‘double down’ on your group values, increasing your investment in them, and reacting more negatively to the critic,” he continued.  “When we disrupted the brain region that usually helps detect and respond to threats, we saw a less negative, less ideologically motivated reaction to the critical author and his opinions.”

Dr Colin Holbrook, from UCLA and the lead author of the paper, added:  “These findings are very striking, and consistent with the idea that brain mechanisms that evolved for relatively basic threat-response functions are repurposed to also produce ideological reactions.  However, more research is needed to understand exactly how and why religious beliefs and ethnocentric attitudes were reduced in this experiment.”

Application of TMS could be an effective mind control tool for people like Kenyans who consider other communities as outsiders or illegitimate thus should be fought or exterminated. The important finding from this study, apart from the fact that people’s religious convictions and attitude towards others can be leveled out, is that tribal and racial hatred are religious in nature. So to effectively eliminate tribal and racial bias, religion should be the target. 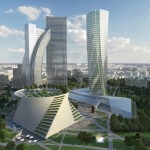