I thought my TV at home is the best, but this new 111- inch double-sided display TV unveiled by LG is the real deal: Double-sided TV!?

Samsung unveiled their curved SUHD TV which was among the company’s 31 products that made it to the finals of the International Design Excellence Awards (IDEA) 2015, one of the world’s most prestigious design competitions. LG’s wavy double-sided new design TV out-competes Samsung’s SUHD TV by fur.

Also read:Samsung reinvents smartphone use with the newly launched Samsung Galaxy S6edge plus

The 111- inch double-sided display is made of three 65-inch Ultra HD OLED displays and allows two viewers to watch different sides of the television simultaneously.The company released two double-sided TV brands. They unveiled a 55-inch version of its double-sided television, which boasts a thickness of just 5.3 millimeters.

I think the TV can be used for commercial purposes like in exhibitions and conferences since it’s difficult to imagine how a family can use such a TV, unless you have a massive TV room so that the TV is placed in the middle of the room. However, the TV can be beneficial in a big family where siblings always fight over channels. The family can divide themselves into two and seat on the sides then watch their favorite shows at the same time.

LG provided that double display TVs are prototypes. LG wanted to show off their potential in tech.

“Without backlight and other auxiliary layers, the OLED display is fundamentally less complicated compared to LCD, and in time less costly to manufacture,” said Dr. Ching W. Tang, who is widely credited as one of the pioneers of OLED technology, during LG’s keynote presentation at this year’s IFA.

Mashable reports that LG unveiled the ‘wallpaper’. Wallpaper is an OLED display that offers a 55-inch display and a thickness of under 1 millimeter. Aside from the display’s thinness, the other feature that lends to its wallpaper moniker is that fact that it can be easily attached and removed from walls via a magnetic backing.

“I have no doubt, given its advanced features and superior performance foldable, wearable, flexible and transparent, OLED is the display technology for the next generation,”Tang added.

Tech companies are advancing their know-how in different fields besides smartphones. Last week Samsung launched the AddWash, Internet-connected washing machine that includes a small door to let you add forgotten items like socks, a SleepSense which is a sleep tracker you slip under your mattress to track your rest and SmartThings Home automation Hub and sensors. 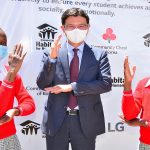