Every college student goes through the phone during lectures. In school we had classes that one had to make sure that the phone has enough bundles to last them through a three hours class because they were very boring. The social media provides unlimited entertainment that always takes the mind off lessons. Students have different reasons why they can’t give their lecturers 100% concentration and opt to check their phones.

Research conducted by Barney McCoy, associate professor in the College of Journalism and Mass Communications at the University of Nebraska came to a finding that digital devices are not suitable for classrooms. Lincoln found out that students spend nearly 21% of class time using a digital device for an unrelated activity like email or social media. This comes a time when the government of Kenya in partnership with Samsung is initiating smart classroom projects that if not checked might increase digital related distraction in schools.

The survey was done in 29 institutions and found out that 47% of the students go through their phones in class just to get entertained, 46% said they complete related schoolwork in class and 63% said they used technology in class because they wanted to relieve boredom and stay connected.

Also read: TurnoffToTurnOn – There is something in your phone that will give you an amazing sex life

Students have the responsibility of ensuring that they acquire knowledge and utilize the time that the lecturers are in class. Its a good thing that some students admit that going through the phone in class is a bad habit but tend to ignore that fact. 89% of students surveyed said devices made them not pay attention, about 80% said devices made them miss instruction and about 38% said they bothered peers.

“As students become tech-savvy, they’re just more distracted inside the classroom,” says McCoy who did a similar study in 2013. “This isn’t exclusive to students,” McCoy says. “If our phone beeps or buzzes, many of us instinctively reach for it. We don’t even think about it anymore.”

Most lecturers feel unappreciated or disrespected when they find out that few students pay attention in class. Professors feel they need to create engaging presentations to compete with technology for students’ attention.

Marilyn Santiesteban, professor at the Bush School of Government and Public Service at Texas A&M University, was tired of seeing her hundreds of students look down at their screens in class. So next semester, she will require students to leave their phones in boxes at the doors to the auditorium. If students still get distracted on their computers, she may also ask them to put down their laptop lids at designated times.

“I might become the most hated person on campus,” Santiesteban says. “But I want this to be positive, not punitive. And I think we can all give up our phones for an hour without anything horrible happening.”

“You have to exert a certain amount of willpower to stay focused, since the options of email and texting are so tempting,” Riley Soward a second year student at Boston College said.

The second student adds that laptops rather than phones are the real culprit, since students can now use iMessage to text on their Macbooks.

Steve Lambert a web designer at Eyebeam Center for Art and Technology designed a web app called SelfControl which blocks access to email and certain websites for a designated time period. The block cannot be undone, even by deleting the app or restarting the computer.

“We all want to check our emails – it’s really hard to change those habits,” Lambert says. “People write me that SelfControl helped them get their master’s or finish their law school exams. It’s nice to know that novels are written and degrees are completed.”

Do you know you can now be rewarded for not checking your phone in class? This sounds crazy but a new smartphone app has been created known as Pocket Points. The app rewards students for keeping their phones locked during class by offering them discounts at local businesses, including restaurants, clothing stores and tanning salons.

Mitch Garener and Rob Richardson took a leave of absence from Carlifonia State University, Chico last year to develop Pocket Points. In the first couple weeks after the app launched, 30% of Chico State students had downloaded it and around 25 local businesses had agreed to participate, Richardson says. Since then, Pocket Points has spread to five other campuses, including Pennsylvania State University and the University of Michigan. This summer, company representatives are preparing to launch the app on around 100 additional campuses.

“A lot of the stores we focused on involved food,” Richardson says, noting that the local Subway and Brooklyn Bagel stores signed on. “We know that’s something students have a hard time saving for, and it’s one of their biggest costs.”

“We’re not saying we’re solving this problem of being distracted in class,” Garener says. “But I do think we’re mitigating the problem by offering a reward and positive reinforcement.”

“I appreciates the intent behind the app. Some professors at Penn State use clickers to monitor attendance, and many students show up just to record their attendance and then get distracted on their computers.” Alissa Iannacchino proved that digital devices are not suitable for classrooms.

“There’s one class with 600 kids where if you sit in the back, you literally see everyone’s screen,” she says. “Some people are literally watching Netflix the whole class. It’s like why did you even come?” Forbes reports.

Read: How to check your unbecoming social media habits for the sake of productivity 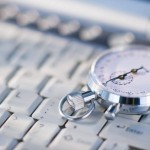 How companies prepared for the leap second