Google made driverless cars with the aim of reducing accidents on the roads. The search giant also created a website used to deliver reports on accidents caused by the cars. So far, it seems that accidents only occur when humans are in control – which seems to indicate that humans are their own worst enemy on the road hence when humans are in manual control, things happen imperfectly, but computer-generated devices would outperform human-operated ones. Of course, this type of thinking is based upon the intelligence of the programmer.

When driving behind big semi-trailers, people regularly take risks overtaking them because they often have to first move out from behind the truck to see if the road ahead is clear before passing. This is particularly dangerous on single-lane highways because such a maneuver can mean driving into the path of oncoming traffic. Now Samsung Electronics has come up with a way to help reduce this problem by mounting cameras on the front of a truck and large screens on the rear to display to following drivers a clear view of the road ahead. This way, the truck driver can see what is ahead, and drivers behind can see what’s beside or ahead of the driver so as to plan quick decisions.

The concept takes the traditional long-distance truck and adds some technology to aid both truck drivers and trailing traffic. The Samsung Safety Truck features a wireless front camera and four outdoor rear monitors to project the traffic conditions for both the truck driver and trailing drivers.

In addition, there’s a night mode, which you can see demonstrated in the video above. Often, vehicles behind a long-distance truck cannot see oncoming traffic because of their massive size. Should a driver decide to pass a truck because he or she thinks the coast is clear, with another individual pulling out at the same time, the result could be a head-on collision – and tragic for all parties involved. 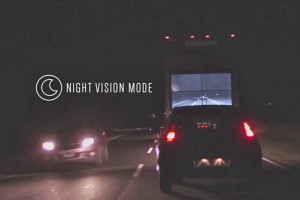 Samsung says it has tested its Samsung Safety Truck with a local B2B client in Argentina, and notes that the test vehicle is no longer operational. Argentina is an ideal place to test the company’s new safety vehicle, seeing that, according to Samsung’s own promo video, nearly one person per hour dies in a traffic accident. While Samsung sees the vehicle’s usefulness in Argentina, we’d certainly hope the manufacturer brings these vehicles worldwide, including to the United States. According to the statistics, an average of one person in Argentina dies every hour to a traffic accident, and many of those deaths are caused by reckless passing on the country’s two-lane roads reports Extreme Tech.

Samsung may already be well-known for its amazing electronics including smartphone and tablet, washers, dryers, refrigerators, and TVs. But given the new invention of the Safety Truck may out compete all of them.

Read: Samsung: The future of the Internet of Things