Twitter has lately launched a handful of features for users to enjoy a more lively and flexible platform whilst socializing. After the live streaming feature dubbed ‘periscope’, the platform has rolled out Retweet with comment a feature that allows users to embed a tweet in their own tweets which will see them go beyond Twitter’s 140-character limit.

Before, the quote option did not allow more room for personal thoughts to a tweet or even more for images and other elements that incorporate a tweet. in as much as the revamped feature does not give so much allowance to express thoughts and opinions, users will at least forget copy-pasting a tweet’s URL to refer.

Announced by the company through a tweet, twitter is currently offering the feature to iOS and web users with the same coming to Android soon. Here is a simple way to go about the revamped feature;

How to use quote Tweet to add your own comments:

Roundabouts are more efficient than intersections - that's according to numerous studies

Safaricom subscribers who purchased airtime at half price to face penalties 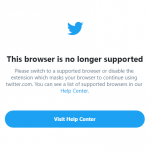