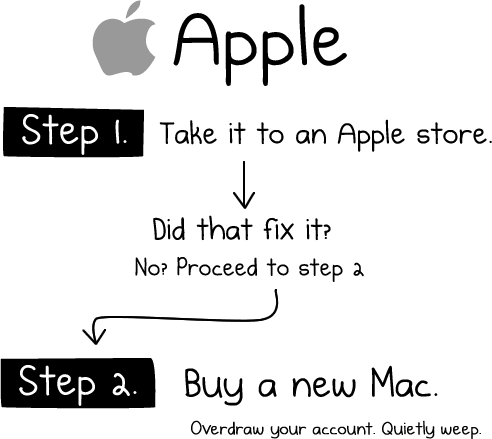 Apple, Inc: Once upon an Apple.

Since its inception in 1976, April 1, formerly Apple Computers, Inc., has seen itself rise in the global computer industry. A blue-chip company, that is the treasure-pot of many an investor. It was the most admired company, according to a Fortune magazine publication, as of 2008 in the United States, four-year term in the world, running from 2008 to 2012. According to 2013, Apple has over 408 retail stores in fourteen countries, with an online Apple Store and iTunes Store. It had a market capitalization of over $400 BILLION according to analysts’ reports of 2013, standing at over 700 billion dollars in 2014, that leap is indicative of the importance of its products. Known for its pioneer computers; from the Apple I, Apple II, Apple III, to the Mac Book, iMac, it is the epitome of excellence and innovation; a company that will drive the next wave of innovation into the next century. There’s nowhere that Apple Products can’t be found, thus it behooves Apple to provide after-sale services, especially when such products fault, thus the need for ‘fix my pc’, stores.

The MacBook, a testament of sleek, ergonomic design, with multi-functionality, is convenient for students, professors, and business people. It was first introduced in May 2006, to replace the iBook as the Prime Consumer Laptop. Nothing is perfect, thus the need for MacBook Repair. While a neat design, it still remains the most difficult Apple laptop to distinguish, originally, the standard model came in a white casing, whilst the high-end one came in a black enclosure. To this effect, Apple, Inc has designed the laptop identification system for your convenience, which actually helps during the Mac Book Repair Sessions. Discontinued in Mid-2010 due to the need of constant upgrades, the Mac Book Line was replaced by MacBookAir, which is now the current consumer laptop line. The Mac Book Repair sessions include: Trouble-Shooting, Upgrade Sessions, Hardware Problems like Battery, Repair Extension Programs, USB Power Adapter Take back Program, iPod (nano) Replacement Program, the iMac 1TB Seagate Replacement Program, the Mac Book Bottom casing Replacement Program, Custom Configuration. What should you do? Know your Mac, for efficient repair. Visit an Apple Store with a “fix my PC”, Apple ‘Genius’ or an Authorized Apple Service Provider for Assisted Service or for Self-Service (comes with a self-service kit).

The iMac, from the iMac 20” EMC 2105 and 2118 to the iMac 27” EMC 2309 and 2374, repairs can be done. Whether you prefer to visit an Apple Store or an Authorized Apple Service Provider, or if you are a self-styled Apple ‘Genius’, your problems will be fixed, if not, then don’t forget to pray really, really, hard. So, doing a tear and repair of the iMac, what are the problems? Well, half-screen problems, hard-drive replacements, no power, inability to see hard drives, greying out of the screen are some of the problems you need to be familiar with; so knowing thine problem is important for an efficient Repair Session.
– Fixing half-screen problems, you can replace the screen, which might prove a costly affair.
-No power caused by bulging caps, replace the caps (but what caps?), is the question, which model, whether to go rubcyon or other, another question for the Apple Repair Stores or the self-styled Apple ‘Genius’.
The iMac, a cutting-edge desktop, ahead of the pack device, remains the epitome of technological prominence and innovation; an artful masterpiece and all-inclusive technology with Third-generation Intel Core, up-to-the-second NVIDIA Graphics, and remarkable storage options. A testament of simplistic elegance, for as Leonardo Da Vinci quipped, “Simplicity is the ultimate sophistication.”

Apple, Inc, with its vast products, offers to the end users support. For repairs, Apple offers a Repair Status Report; offer the consumer an Apple ID or Case/Repair ID that they might check the progress. Support services in each of its products. You can find the nearest Apple Store to get a complete analysis of your problem-I saw one at Nakumatt Thika Road Mall; just pop in for all enquiries.

It’s no surprise that Apple, Inc has a market capitalization of over $700 billion, due to its unique set of products and brand-loyal customers- the brainchild of the late Steve Jobs, Steve Wozniaki, and Ronald Wayne. From Apple I, iMac to even the iphone 6, it has been quite a journey. ‘Fix my Pc’ centers are fast, efficient, reliable, a testament of computer brilliance.
Computer Repair: “Of Gadget Boy and Heather-” getting your gadget to work straight

From viral removal, spyware removal, upgrades, to Broadband installation, computer repair is vast, based on the current needs of the victim of computer malfunctioning. Computer repair has never gotten this convenient as you need only take it to your trusted Computer Solutions center or seek the services of the ‘Neighborhood Genius’ . A warranty might guarantee you another computing device, but what happens when this period vanishes like the morning dew? Are you familiar with the various problems that your PC might incur (lucky are you if you work somewhere with an IT department); it behooves you to be knowledgeable or at least have some semblance of computer literacy and her problems- the computer is a fickle mistress; she might be faithful for a while, but soon, she will initiate the “B.I.T.C.H.” mode, that is, Before I Totally Change Heartlessly. No sooner than you can scream-BINARY, you have a computer crisis, and oh what do you do? The hardware is acting up, what could be the problem, files are disappearing (where are my tax-returns or assignments), you fly into a paroxysm of sorts, and your house (perhaps your kids), school, are subjected to traumatic verbal diarrhea.

Before you realize, the damage is done. Yes people, computer-malfunction does destroy lives, literally. Knowledge is power, thus it’s your Divine Prerogative to understand the troubles and tribulations of your computer foolery. So how do you streamline computer repair, make sure you package solutions in a professional manner (especially if you are an IT company). The victim should learn certain tools of the trade, software deployment, penetration and vulnerability testing, network integration and security, back-up and recovery solutions, so forth. For an IT company, what must it do for consumers?-Software and Hardware Pre-Sales Support, Software Solutions support, Windows Deployment, Basic End User Training, et cetera. If all and nothing works, well, you could always get a new one, quietly weeping! Remember, “Just because an apple falls one hundred times out of a hundred does not mean that it will fall on the hundred and first,” Derek Landy.

Safaricom Apologizes For The Conning Bots