Hullabaloo in the digital migration:  Double standards and self-centrism by top media houses 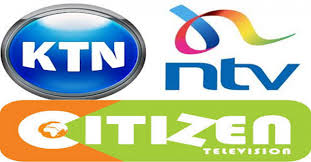 Dear Kenyans, BEWARE Startimes and GoTV are distributing NTV’s, QTV’s, KTN’s and Citizen’s content without consent. The three media houses from Africa Digital Network consortium have been running the informercial warning viewers not to be duped into purchasing the set top boxes as a means to access and watch the four channels as it is infringement on copyright.

Well, the three media houses are without a doubt entitled to protect their market and mark territories like it seems with the circulation of the above message which is almost hilarious looking back at the numerous court proceedings the three parties have had since last year. Late last year, the three media houses were given a 90 day notice to negotiate with the Communications Authority over license issues which they got over by end of 2014 when the media houses asked to be given more time to set up digital migration infrastructure.

Where it all began

The drama began in 2011 when the media houses under the Africa Digital Network umbrella withdrew consent of airing content from signet then gave permission again in 2012 when they got back into the digital migration programme and to date, there is no factual basis that the houses have withdrawn again.

Clearly, this is an inter-party domestic that has been on-going for years now and the best way according to the media houses was to call out the digital platforms on air which GoTV and startimes have come forward to deny and threatened to sue the consortium for that matter. In what seems like an on air war now, StarTimes has also launched its informercial saying all content aired on the set top box is legit.

GoTv has termed the informercial defamatory and misleading to viewers as well as contempt of the highest order to the court since the platform has claimed to be operating within the confine of the laws of Kenya. StarTimes has also dismissed allegations of illegally airing content from the three media houses according to a ‘must carry’ rule provided for by the Industry regulator that allows the platforms to make local channels available.

Digital Migration is apparently ‘for the people’ as they have all said over and over,  however, this seems more of a business with greedy contenders who are only out to safeguard their interest as investors and exist purely to pursue their personal interest  which is profit maximization. It is okay to say in this case consumer consideration has gone out the window and as a viewer, you will have to purchase two to three set top boxes to keep tabs on what is going on around you.

Where is Communications Authority in all this? Should I establish a media house today, does that mean I will also launch my own set top box to reach ‘my’ audience? Where is COFEK in all this? Or where is that committee established (as they always have) to discuss the issue with consumers in mind? Until when will Kenyan citizens feed into the political and business battles that go in out of court every now and then in the name of safe digital migration?

The media could not be more misleading. The informercial runs in intervals of 10 to 15 minutes making sure viewers do not miss it with the other one from Radio Africa that calls paying for TV pretty dumb and that viewers should consider Bamba Tv a one off-pay set top box with about 70 active channels with some appearing more than thrice on the channel menu. Talk of a fraudulent sale.

ITU’s deadline only 4 months away, temperatures keep rising and consumers keep getting confused and can no longer tell the meaning of the migration with the kind of child’s play going on among parties. Since we all don’t have a choice here, grab you popcorn and watch this top dogs go back and forth at our expense.

Android Lollilop-5.0: Arguably the Most Important Update by Google since 2008.