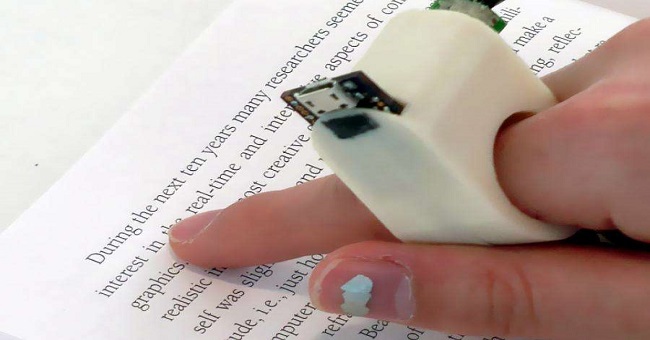 Reading for visually impaired is a luxury. This is because there are very few books that are available in Braille or even as talking books for the blind. Attempts to enable the visually impaired access more written materials have seen the development of other audiovisual software and braille scanners but these technologies have largely been immobile.

To bridge the gap or rather to make as many visually impaired individuals read as many books as possible, researchers at MIT have created a reading aid that is capable of reading out loud any printed text, on books, e-readers, or even tablets. The scanner also has translation capabilities so one can also use it to read texts in foreign languages.

Dubbed FingerReader, the reading aid is worn in the finger and the reader runs his finger from left to right (or right to left or up and down etc depending on the language of the text), line by line, and FingerReader reads out those texts loud.

FingerReader is still a prototype hence it doesn’t deliver the speech in natural language yet. It is also sluggish and often glitchy. This video shows that FingerReader reads out words one by one hence tasking the human mind to figure out the meaning of sentences. Despite the few challenges, finger reader is capable of guiding users in alerting them whenever they reach the end of the line or even veer off any line as described by the researchers in the following words:

The FingerReader is a wearable device that assists in reading printed text. It is a tool both for visually impaired people that require help with accessing printed text, as well as an aid for language translation. Wearers scan a text line with their finger and receive an audio feedback of the words and a haptic feedback of the layout: start and end of line, new line, and other cues. The FingerReader algorithm knows to detect and give feedback when the user veers away from the baseline of the text, and helps them maintain a straight scanning motion within the line.

The researchers need to work on the FingerReader’s capabilities and also ensure the device is affordable especially for visually impaired persons in developing countries.