Following the dismissal of a petition against the digital migration by Nation Media Group, The Standard Group and Royal Media Services , the TV stations associated with those Media houses namely NTV, KTN and Citizen TV have gone on strike. Each of those stations are showing a message stating that “in compliance with that judgement …the Media Owners Association are left with no option but to go off air”.

However K24, Kiss TV, KBC, GBS, and a number of other small TV stations are still broadcasting their programmes as usual.

Judging from comments on social media, it seems the Media Houses on protest do not have the support of viewers. Here is the Consumer Federation update on Facebook following the blackout by three TV stations and subsequent comments by some Kenyans.

Consumer Federation: DIGITAL CRISIS: No one in the history of all democracies has ever won battle against media. Someone needs to listen to protesting media houses.

Nyabiba Enock: Let us go digital no time to waste they will make losses and will open soon

Ako Fred: No one has ever won battle against technology!

I am in full support of digital migration. I urge all advertisers to come together and sue these stations that have gone off air on the basis of ads not aired. As a country we must constantly be ready to embrace good technology like digital broadcast, not politicizing every single thing that the government tries to do.

Secondly, I hope everyone shuns these stations that have decided to go on strike when they call off their strike. They need to learn a lesson that the consumer is the king. Consumers in this case are in support of Digital Migration. 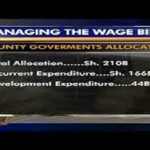 Kenya's soaring wage bill and how to tame it - Part 2