How to hack iPhone 5S

iPhone 5S has been taunted as the most secure phone as it comes with Touch ID, a feature that allows you to unlock the phone using your fingerprints. Touch ID should in fact win a Nobel Prize as it is a culmination of a series of science fiction predictions that had pointed to a time when humanity could be able to unlock gadgets like phones using fingerprints. Apple has outdone itself this time by showering iPhone 5S’ Touch ID terming it unbreakable. 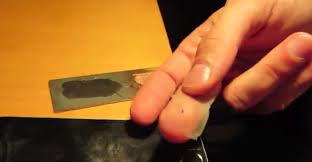 But a German hacker group the Chaos Computer Club (CCC) has claimed that iPhone 5S Touch ID is no better than any other finger print scanner out there. According to the hackers, the iPhone 5s’ Touch ID is only a higher-resolution version of existing sensors, meaning the technology can be hacked by using common fingerprint-lifting techniques. Here is a video on how to hack iPhone 5S’ Touch ID using “easy everyday means”.

In Summary,this is how to hack iPhone 5S:

1. Access to his/her fingerprint. This can be got from a touched place. Preferred is a glass-wear.

2. Lift the fingerprint using graphite dust or cyanoacrylate at a precision of a reasonably high resolution of 2400dpi. The procedure of lifting a fingerprint is outlined here.

3. The lifted fingerprint is then inverted. You will need a specific photo editing software to do this.

4. The inverted fingerprint is then laser printed onto a transparent sheet at 1200dpi.

5. The laser-printed fingerprint is then treated using pink latex milk or white wood glue and left to settle.

6. After settling you will carefully lift up the latex or glue that has an image of the fingerprint, breath through it to soften it, and place it onto the Touch ID to unlock the iPhone 5S.

Quite a feat, right? If you have to break through an iPhone using this tedious procedure, then you must have been very desperate to have that info! Anyway what this proves is that Touch ID is not foolproof.