Come next year, the route to accessing content online will change completely when ICANN finally accept the new Generic Top Level Domain names. For once the internet will be littered by .many things including .kechwanya when we get big enough to buy the name. Among the expected top level domain names is the .dotAfrica TLD. The dotAfrica TLD is proposed as a new gTLD (Generic Top Level Domain) for the promotion of African business, people and culture on the Internet.  This is an initiative of African Union with the thinking that this will create an attractive regional home for the Pan-African Internet community.

On the face of it, this should be a great news for Africa. Better still for those who wish to see United States of Africa (USofA). At the moment the integration of different states to one monolithic country called AFRICA is a problem due to a number of factors including politics, outside interference and the regional cultural differences. Many a time Africans, especially those living outside Africa get annoyed when in other parts of the world some people think of Africa as a country instead of a continent. Unfortunately, those who think of Africa as country do so from point of ignorance and in most cases when discussing the negative issues like Conflicts in places like Somalia and Congo.

So our friends charged with the responsibility of running AU strongly believe that dotAfrica will become a reality next year and has gone ahead to endorse UniForum ZA Central Registry (ZACR) to run the technical operations of the .africa TLD. So far, 39 African countries including Kenya, have already written letters to ICANN, expressing their support for ZACR to run the .africa registry.

The next question some of us are asking is, is there any value in the dotAfrica TLD for brands and individuals around here. Well, there is that part of identifying your self or brand as uniquely African but with internet making the world flat, there is always  mmmh buzz in my mind. Why would one be interested in getting .africa domain name instead of .com or .or.ke or co.ke?  Accodrding to a press release by ZACR:

I like the above statement, the only problem is that it does not clearly explain the benefits. When you say scale business in Africa, what does it mean exactly? Does it mean that you can’t scale up with the existing .co.ke domain names? I get the part of the dotAfrica serving the political purpose for the AU which by the way I think should up their game or be disbanded but I still remain sceptical when comes to commercial and social economic values.

I am not completely opposed to dotAfrica TLD but I somehow share the views expressed by Wayan Vota at ictworks.org:

While I can see the interest in a dot.Africa domain name to generate additional URL registration fees, I don’t see the overall need for a dot.Africa domain. Each country level registrar is already fighting against the lure of dot.com. If anything, the African Union should be promoting transparent and affordable domain registration at the country level. Its only when domain ownership is saturated there, should there be a continental domain.

Rather than being sidetracked by dot.Africa, the African Union has more pressing ICT issues it should focus on. Like I meniotned before, there are Two Ways The African Union Can Take ICT Seriously:

I want somebody to explain to me why we should have a .dotAfrica, especially when you take out the political and patriotism aspect out of it.. 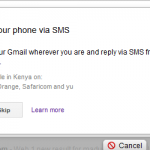 Now you can get Gmail on your feature phone in Kenya, Ghana and Nigeria