Africa Union Commission settled on ZA central registry operator, UniForum SA as the preferred registry operator that will administer the upcoming dotAFRICA Top Level Domain. dotAfrica is set to be a distinctive pan-African identification for regional online operations when it is opened up for registration.

On the 20th June 2011, the Internet Corporation for Assigned Names and Numbers (ICANN), announced its decision to allow applications for generic Top Level Domains – gTLDs. Yeah, now that is what we call opening floodgates for domain name creativity. Probably it would also mark the end of the era of the dot com domination. When they get the dotAFRICA Top Level Domain, it will be possible to have domains such as Kachwanya.africa, Kenya.africa, Nairobi.africa.

dotAfrica will be among the new generic Top Level Domains (gTLDs) that are likely to be approved by the Internet Corporation for Assigned Names and Numbers (ICANN) in 2013.

There is still time and the Government of Kenya through Kenic can still also apply for the .Kenya Top Level Domain. The other alternative would be to go for  what has already been approved in many places like .KE. Either way, .Kenya would be a better way to market brand Kenya around the World

“This is an important step for organizations and individuals interested in acquiring an African online identity, as dotAfrica will give added visibility and identity to operations in the region,” said Neil Dundas, a UniForum SA director.

“The African Union Commission will work with its appointed Registry Operator to establish ways to promote dotAfrica. Specific outcomes will be increased online content generation; the establishment of policies and rules on registrations, intellectual property and dispute resolution;  as well as the promotion of ICT use in the region,” said Abulkhirat  Esam (AU representative).

“The Internet Community is currently participating in the project through the dotAfrica Steering Committee which was selected by the African Internet community and comprising African Internet experts, country code managers, registrars and others volunteering for a better Internet for Africa. Africa’s new Top Level Domain will be used as a vehicle to promote the development of Africa’s Internet services and ecosystem,” said Mohamed El Bashir, Steering Committee Chair.

The dotAfrica project is sponsored by the African Union with support from Africa Top Level Domain organisation (AfTLD). The appointed Registry Operator will be submitting its application to ICANN prior to the deadline in April this year. 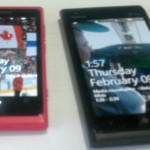 One on One with Nokia CEO Stephen Elop in Nairobi Kenya