I have been on twitter for sometime, seen many people come in, hype their tweeting prowess, give up and then leave or just retire. In that period i have  followed quite a number of accounts both individuals and corporate. Now, the biggest challenge on twitter is maintaining corporate or business twitter account and constantly giving people value they are looking for. It is one thing to join twitter or create twitter account for you business but it is a different ball game keeping that account with useful information. In that note most accounts are just there to retweet what others are saying. RTs are not bad but if the account is only there for Rts….ooooh what if people stop tweeting something worth retweeting?

Anyway that is a story for another day. Today i was looking  at my twitter account and started to wonder where a particular lady from Ghana but living US had gone to. I scrolled my following list to find out that account.  Almost two years since she last tweeted, and in the process i found out that i have been following so many useless corporate or business accounts. Some of them used to be great at giving people good content but they like died natural death. If there is nothing coming from account for the least 4 months then it is a real waste of following space : Here are some of the deadwoods:

Started well, i must say very well. Then sometime in February, they made their last tweet. “Dear Friends, DSTv Kenya is undergoing review and will be unavailable for the time being. But it will soon be back, bigger and better”. Almost a year later, they are not yet back.  I think somebody said something which was not politically correct corporate speaking and was fired. Well, if you are following this account, better create a space in order to follow another one.

I like Kiss Tv, coz of  the XYZ Show, although apart form that and Matatu show, i have no idea what else is on that channel. But they too are on twitter, and the account was last updated sometime in March.. May be this was/is fake account. Whatever the the case it is useless. I think this one is the classic example of when a company has certain major event they are almost everywhere and Social media is the most misused. Or the other way of looking at it is that they came in, try out and then #Failed. The last time they update their twitter account was June 4th…UnFollow.

This will go down as the most controversial fake corporate twitter account so far. It is said that whoever was/is behind the account works at CapitalFm. Call it inside job, yeah. Unfortunately, something happened to the account and the last time it was updated was on July 29th. So, did DJ CK find out the person and told him/her to go to hell or did he pay top Kenya Shilling for the account? I would like to know but meanwhile the account is no longer any good…That Button..

Ooooh and my friend Kahenya is the brain behind this although i am not sure if he still involve with the project.  Zuqka pull out magazine which comes out every Friday on Nation Newspaper is meant to make you famous. But their last update was in August 29th. I am not going to say unfollow the account until Kahenya say’s something…..

See also  Fellowships being offered up in the fields of new media and digital innovation. Apply!

I must say that, Mashada with its blogs aggregation section is a top Referrer of the traffic to this site.. beaten only by Google, Facebook, Twitter, Bake and portal.opera. The Political discussions going on at Mashada is sometime depressing but unfortunately it reflects what some Kenyans are deep inside their skins. The last update on twitter was on August 18th..too bad.

This is the most dormant account of all the listed accounts here. We all know about makmende, the first Kenyan  internet hero but why would they do this to our hero.. Anyway to be fair the twitter Mekmande account might be among the numerous fake accounts which came up when Mekmende was at its peak. The last update was on 12 December..right, that has to be last year. 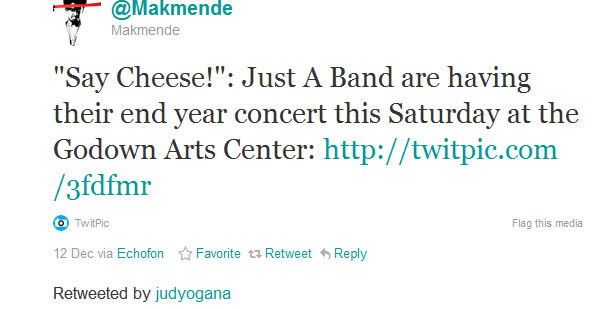 8. @Afrigator . “We post the best links from Africa and respond to your request.” Well they last did that in May. I have a feeling that most startups are bought off to be killed. Google, Yahoo have  assassinated many startups  but the habit is now spreading everywhere. R.I.P @Afrigator and now you can unfollow

9.KenyaESp: They call themselves Economic Stimulus, whatever that means. I am still not sure their roles in the government but that does not matter anyway. Last update on August 10th.

10. @KenyansOnTwitterBullies. Yes, I know, no such account exist but Kenyans on twitter have changed from what we used to have on early stages of twitter. By then people used to reason, agree to disagree and come up with solutions to problems. Now we have bullies! What is roasting anyway? Sounds like high school juvenile thing. We can no longer have sober discussions, with radical views being thrown in.    By the way, being on twitter does not make someone an expert/know it all. #Thatisall